This month marks six months I've been working with my class in Delmas, Haiti. The first day I met them, they were still identifying colors and shapes. I've asked the students to write an essay as best they can in English, today I received my first essay to grade. I'd like to share it.  If my students can do this in six months with only an hour a day on an "iffy" internet connection, just think what we could do with 6 hours a day, 5 days a week with a good internet connection.


Would you all like to help me grade this paper :-)

What makes you unique?

The core word of this question is “UNIQUE”.ENCATA defines unique as being the only one of a kind, being different from other in a way that makes someone or something special or worthy. Regardless of one’s belief, either in Bible either in the theory of evolution of Darwin, everyone can agree that the earth has been peopled for more than one million years. With this age knowing as humans give birth fast, the number of humans that have lived is uncountable. But let’s focus on men .So all these men were they similar, or were they different?

Is there a chance that I’m the exact copy of somebody who had lived before?

A sharp study will bring light upon our debate. 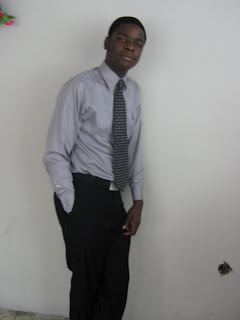 To discuss that subject we will consider five points: BIRTHDATE, FAMILY NAME, RESEMBLANCE IN APPEREANCE,SIMILARITIES IN CHARACTER at least the PERSONALITY.
Life is with no doubt the most beautiful thing that exists… To experience happiness, bliss and love one must be alive. The process of life will not be part of our study but we’ll emphasis on the birth in this point .Even though we take count of the exact time of the delivery it’s probable that more than five babies take birth at the same moment. Therefore many people can have the same birthday or if you allow this abuse of language the same birth minute.

Generally after the birth every baby is given a name .According to the Bible since God had created the first man HE had given him a name and thus to the woman; this has kept on up to now .A name is given to a child to call him or her when needed and to identify him or her from other members of the family ,surrounding et cetera. The question of last name has been coined by Italians at the beginning of our era… Normally children bear the last name or their father but sometimes resulting to a variety of problems some mothers give their last name to their child. The last name tells the origins of the child and helps identify the child from other children who might have the same first name as him or her.

Hereditary links are so remarkable that some children walk, talk in the same way as their parents. Sometimes when you see a kid there is no need to meet his father or his mother. We made this a approach to make you see and understand that two people could have the same name or the same character and behavior. Even though we do know that nature has a different impact on each person, which will help the person to build her personality.

The personality is somebody’s set of characteristics, his or her total attitudes, interests, behavioral pattems, emotional responses, social roles and other individual traits that endure over long periods of time. George Sylvain a Haitian poet of the 19th century said that the name we are given is a mirror in which our behavior and personality are reflected sometimes.

From the first point to the last discussed in this study let’s notice that none can top the personality. Though it is seldom that two people have the same full name but it is something that’s already happened. According to the fact that the birthrate in a hospital in the USA is “X” and in Haiti it is “X” so we can all admit that many babies can be borned at exactly the same time. In family children can have the same handwriting as their parents. And we cannot ignore the prominent resemblance that exists between family’s members.

I have a question.

I am all for the United States Navy. They are my heros in so many ways. All around the world our men (including my two sons) and women serve our country and provide support to so many other contries. On April 6 the HSV 2 Swift finally delivered nearly $1 million worth of relief supplies to Haiti. However, the Navy’s program Project Handclasp spokesperson said because of various transport difficulties the bulk of the food had passed its expiration date and had to be thrown away.

Now I know most food has an expiration date of a “long time” which tells me that the food either was old to begin with or it’s been sitting in a warehouse for a “long time”. Which is it?

If it was old to begin with, why did Project Handclasp accept it in the first place? If it has been sitting in a warehouse that long, why is that? Someone needs to be doing their job a little better. It is not only wasteful, it is heartbreaking.

Commander Lewis Preddy, said sending the food on a ship earlier would have meant drawing down resources from humanitarian missions elsewhere and I wouldn’t want that to happen either. But I would like to know who didn’t check the expiration dates before it was loaded on that ship.

We are the United States, we make things happen in a timely fashion. Commander Preddy, you need to check the expiration dates a little closer.
Posted by V at 8:08 AM No comments: Links to this post 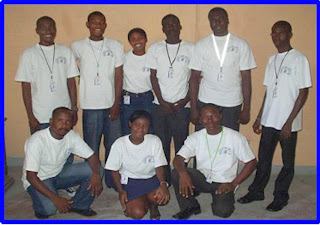 What do you do when you see a need? Fill it! That is exactly what a group of young collegiate and professionals have done in Delmas. In Haiti there is a saying, “to do something by nails”. Translated… trying to get something done with out the proper tools and frames. Buteau and his friends put their heads together and developed a plan to address the lack of proper tools and help the community build a frame on which they could build lasting development.

MOJECF- a French acronym translated to English means, the mobilization of the young people against the flails was created in 2006 and recognized by the Haitian government in 2008 as a nonprofit, humanitarian, Christian community organization. MOJECF is committed to community education to combat the flails the youth of Delmas encounter every day of their life. 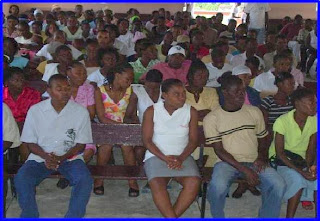 Recently MOJECF has sponsored several community awareness programs to address environmental protection, communal hygiene, sexually transmitted diseases and tuberculosis. In partnership with CCHER (Center for Community Health Education and Research), Food for the Poor, CONCERN, Grace Children’s Hospital, guest speakers Dr. Blandine and Dr. Duc, hundreds of Delmas citizens have been given the proper tools to develop a framework for lasting development.
Join with me to help spread the word, support them and pray for their successful continuation.
Visit their web page and send them a note of congratulations.

Check out the Future Leaders of Haiti 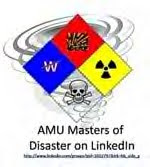 Who's in my vision

How many do care?